If we are aware of the actual state of our culture and politics, with the rise of the right-wing populism, the crisis of the left, the influence of design products in the shaping and controlling of the every-day-life aesthetics, with the way companies like Apple, Facebook, Google and Microsoft influence people’s actions and communication, and the increased power of culture industries in aestheticizing, and neutralizing every discourse that may have the potential of becoming antagonistic, we definitely have to consider the possibility of taking a step forward and becoming politically active. Active in a sense that is not superficial like following hashtags trends that last less than a couple of days.

The current crisis in democracy is due to the conjunction of a state of affairs that cannot and does not want to change. Nevertheless, and as we know, conflict is a dynamic state from which democracy can be reaffirmed by the arising possibility of some transformation or radicalization. Alain Badiou claims that in order “to defend the new kingdom of emancipatory politics, we cannot radically exclude all forms of violence.”Alain Badiou | Polemics | Verso | 2014 That is why our political opinions and actions shouldn’t be banal. We have to be able to attempt to understand what has been done and what has been left behind in the course of our recent history to realize why we ended up in the historical situation we have to assume and confront right now. We are required to remember, and we have an obligation to remind ourselves that what is happening is not entirely a matter of chance.

In this order of ideas, by considering the possibility of interpreting the aesthetic sphere as a dimension of the political system, some questions arise: how much can we expect from art? Does art have to take place and assume a particular position or certain responsibilities? And if yes, how and from where? Having this in mind, I would like to try to address (knowing that I will fail in giving a complete view) one of the most controversial and forgotten – and even despised – notions in art: the concept of autonomy in Theodor W. Adorno. The aim is simple: to try to find ways for approaching art believing in its capacity to serve as a discursive tool for criticism and resistance in times where everything it’s been neutralized in real-time by the market and by the post-industrial state of the society of entertainment (the spectacle is long gone), and with social media as the most powerful tool for controlling and sedating people actions (including the artistic production and reception). Art is always negation, both of social praxis and of itself and its own tradition. Negation is what gives art its irreducible condition, and it is what secures its autonomy. Art should be able to produce a discontinuity, a rupture, not an event. Moreover, beyond its sensitive dimension, art is a process that has to do with the manifestation of any regime of truth. As follows, if art carries a certain kind of truth, this truth manifests itself at the moment when there is a rupture, creating a meaning where there was not, however, this truth is given as an unforeseen event. We can argue that to signify ruptures can be understood as the hegemonic power that art carries within.

To approach Adorno’s notion of autonomy, it is convenient to remember that he developed his theory by analyzing the dialectic relation between the political influence in the process of production and reception of art. His œvre was intended to lay the foundations of a theoretical project to safeguard the avant-garde art from the homogenizing effects of the Kulturindustrie. In the Dialektik der Aufklärung he denounces the “prescribed diversion“ of the cultural industry as “transposition of art into the sphere of consumption, reducing the aesthetic pleasure to a mere sensible pleasure.”Max Horkheimer & Theodor. W. Adorno | Dialektik der Aufklärung | Fischer Taschenbuch Verlag | 1988 His theory was based in denouncing—“as moralist and social critic as he was“—the irruption of the cultural industry in the sphere of pleasure. For him, to have fun or to be able to have pleasure means to consent and to be part of a situation, since “amusement always means no thinking, to forget suffering even when present.”Max Horkheimer & Theodor. W. Adorno | Dialektik der Aufklärung | Fischer Taschenbuch Verlag | 1988 He didn’t follow the Kantian solution of the antinomy between the two forms of pleasure (the aesthetic pleasure and immediate joy). Instead, he opted for condemning “for moral and no aesthetic reasons, the confusion created by the cultural industry between the aesthetic and the sensible, he didn’t claim for an autonomous aesthetic pleasure, he defended the moral and critic content of such pleasure.”Christoph Menke | Die Souveränität der Kunst | Suhrkamp | 1991

In this order of ideas, for art to preserve its power as a discourse that stands against the excess of Capitalism with its renewed instrumentalized reason seems to be necessary more than ever. However, it is important to avoid anachronisms and moralist approaches. One of the most insisted topics in Adorno’s theory is the reaffirmation of the clear difference between an artwork that can be experienced and understood solely and exclusively through the aesthetic reason, and the banal joy of an artwork of consumption and entertainment well known as Kitsch, which is nothing more than mere merchandise, and as such, moves in the market by the law of supply and demand and superficiality, creating needs and expectations, functioning as a placebo (just as design products). Adorno was interested in preserving for art its power of social criticism through the negation of the social itself, to save art’s autonomy as an aesthetic object and, simultaneously, to consolidate its sovereignty as a form of knowledge that also disassociates itself from other discourses and spheres of value. “To delineated itself as modern, it is imperative that art define itself against those institutions which have brought it into being [...] this model of autonomy allows for a defence of art against reductively heteronomous notions of art as a social practice,John Roberts | Revolutionary Time and the Avant-Garde | Verso | 2015 but from within the space of art as social practice.”

The eradication of the nonaesthetic reason is what gives art its sovereignty. It is important to account that for Adorno, an artwork is autonomous because it can only be understood through aesthetic experience. With this, aesthetics becomes sovereign: only through aesthetic reason am I able to understand, or at least, to approach to the message a work of art has to communicate. There is no need, nor is it convenient, to look for an additional or nonaesthetic reason to try to comprehend an artistic object. Other forms of comprehending the world such as morality, politics, science or religion, are excluded. To subvert the rules of reason is what gives art its aesthetic sovereignty.
I bet that an autonomous work of art is not and should not be exclusively formal, and the aesthetic experience is not and should not be solely aesthetic. That is why I believe in something conciliatory, as to consider the possibility of a hermeneutic interpretation, following a posture pro Martin Heidegger and by extension Hans-Georg Gadamer, or from H. R. Jauss, or why not, through an ethical and language reading of Ludwig Wittgenstein. There is, however, a fascinating approach coming from Rancière’s idea of Le Partage du sensible that should be held in consideration. In this case, understanding Partage as ‘to divide’, ‘to share’, as the premise for a renewal of the political sphere. For him, a change in the sensitive sphere will produce a transformation of the political dimension. Grounding his theory in the Kantian notion of sensus communis, he believes in the possibility of seeing art as a vehicle for participation and understanding, since the divergences in sensitivity open the dimension of the politic. The idea is to rethink the aesthetic fact as a stimulator of some form of transformational power and not as a simple witness; thus the aesthetic experience will promote equality and the re-conquest of the lost unit of individuals.

Returning to Adorno’s puzzle, he adds another element to the autonomy- sovereignty equation: the aesthetic negativity. He considers that the faculty of art lays in its capability of negation and therefore in its power of not being understood, power that apparently escapes also the aesthetic sphere. In his eagerness to safeguard art, this becomes unattainable, since not even the aesthetic reason can be considered as a way of reasoning. Aesthetic negativity is, therefore, the negation of any possibility of understanding an artwork and the negation of art itself. The model is: I experience an artwork, but I’m not able to establish communication with it, and although it comes from the social praxis, it is incomprehensible as a cultural product or as an artistic manifestation of an individual. Adorno’s notion of autonomy coming from the aesthetic negativity perspective seeks to generate a cognitive crisis. Therefore no discourse will be able to allow its comprehension (not even the aesthetic? it seems like it). “If the autonomy model describes the relative validity of the aesthetic experience, the sovereignty model attributes an absolute validity to it, since it simultaneously breaks the good functioning of the other modes of discourse. The model of sovereignty sees in the aesthetic experience the means of ruining the predominance of the extra-aesthetic reason, thus constructing the instance of a critic in the act of reason”.[6] Adorno tries to solve this contradiction by developing an aesthetic based on the negativity of the aesthetic experience, generating more tension to the already complicated equation. To resolve this dilemma, then, without weakening any of the two concepts (autonomy and sovereignty) is the task that emerges from his work, and Adorno himself fails to decipher it.

To defend the autonomy of a work of art is to generate the guidelines for asserting the sovereignty of the aesthetic reason, and at the same time, its negative condition. “If negation produces autonomy, autonomy is that which secures the conditions for negation.”John Roberts | Revolutionary Time and the Avant-Garde | Verso | 2015 This can be understood as a way for preserving for art its freedom and space for criticizing all discourses of reason, to which they fail to pave the understanding.
“Art is sovereign not because it abolishes the frontier between the aesthetic experience and other modes of experience, to assert itself as an overcoming or a decomposition of the reason that was imposed immediately upon reason itself, but because founding its validity solely in itself, constitutes a crisis for the functioning of our discourses”.Christoph Menke | Die Souveränität der Kunst | Suhrkamp | 1991 It is seen in this theoretical development proposed by Adorno that the only possibility for the spectator to approach an artwork is through a negative experience: a lack of access to the work, a pure incomprehension. The lack of a shared language, which denies the possibility of feedback, leads to a discursive criticism through the denial of the social praxis by the isolation of the artwork in its sovereignty.
To rescue the importance of Adorno’s contribution, hermeneutics seeks the reconciliation of these categories through a dialogue between different discourses of reason. The aesthetic experience, from a hermeneutical point of view, does not exclude other forms of knowledge. This model wouldn’t reduce the autonomy and sovereignty of the work of art, nor the aesthetic experience. By having the possibility of reading, communicating and understanding an artwork through other discourses, art gains more potential of experience, and therefore, of explanation of life, even in its critic content. 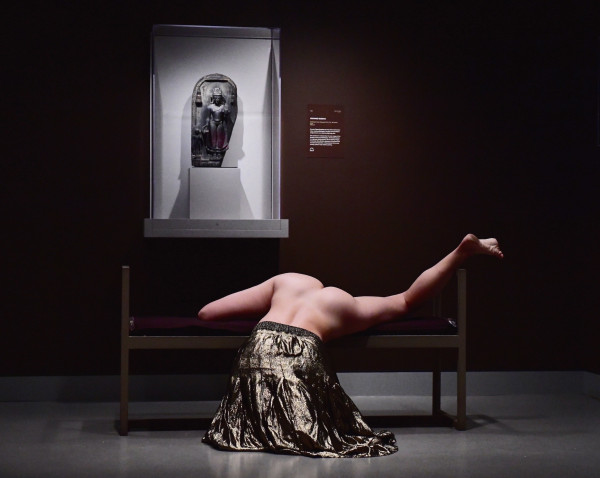 I am interested in taking the path of transformation and self-healing—what I call growing myself a new body, a utopian body—to its end.