is an artist and co-founder of the Kunstraum school in Vienna.

“We are working with artists who are acutely aware of and concerned about our situation today, so their work is a response to this condition, though it doesn’t always necessarily take the form of an overtly political statement. A work is an extension of the conditions of life, not their illustration.”Adam Szymczyk in conversation with Michelle Kuo | Artforum | April 2017

From the beginning, documenta 14 was a political statement, starting with the announcement of not only taking place in Kassel, but in Athens as well. Immediately, the contemporary hegemonic art discourse’s binary codes lay open all about: in our heads, in conversations and ideas, and nothing could be thought about, criticized and liked that didn’t refer to those codes. Since the first documenta in 1955, in post-war Germany, on the most eastern border of the German west, politics were more or less inherent in almost all editions (a direction getting more intense with Catherine David’s documenta 10), but now it’s being argued like never before: if, and to what extent art can (is supposed to, or must) be political; and in my opinion, the question is now finally becoming obsolete. Quite on the opposite, no art can now be not political, and there is the extremely exciting hope that a revolution within the artworld has started to take place, which leaves the market and ‘art as a commodity’ dull and tedious, and is replaced by art as a form of social practice, generating agency with the potential to enhance many lives.

The most important question is: How the so-called West can get rid of its self-certainty and not be trapped in neo-colonialistic practices? Numerous discussions throughout all social media, since documenta opened in Athens, have shown that this will not happen soon, thus, some questions arise: Is it ever going to happen? What effort does it need to take place - what forms of de-privileging could actually function?
Adam Szymczyks proposition and ideas: to learn from Athens, from its crisis (as well as from it being the cradle of democracy); to deconstruct the power complex that an exhibition like documenta is in itself (and through its history) through de-centralization; ‘to let the subaltern speak’ (a request that in its mode of order is already questionable); and within all that, to use the aesthetic potential of art as a medium that could operate as a productive critical tool, able to accommodate voices of dispossessed individualsMaria Boletsi | From the Subject of Crisis to the Subject in Crisis | The documenta 14 Reader | 2017, when always referring to the above mentioned binary codes, refuting them by asking the question of hegemony versus victimhood.

With this presupposition in mind, another question comes to place: What is happening within our bodies and in our minds, about and during, (and now after) documenta 14? In Athens (and in all institutions of art, in the streets, in encounters with people); through texts that need to be read; in performances that aim to draw the audience out of institutions and into public life; in documenta 14 radio and documenta 14 TV channels, in assemblies taking place since documenta started to take shape, which are happening in public, aiming to create a public. What will I, the individual spectatorwandering through exhibitions as well as through the city, taking in art in the various forms described above—experience within these settings? Will I change, and will I become part of a public that will be able to create new modes of how we live together? What mind-sets, what kind of disposition do I need? What are my limits? Do the (still classical) forms and settings in which the art works are presented support any experiences that lead towards these goals?

Steadily, it’s becoming more obvious to me: the experience is not solely intellectual, I have to join throughout my body, and make myself available with all my senses. I have to break open with receptiveness, through all media and various types of approach. The texts I read in solitude; performances I experience in simult aneity with others, therefore creating a collective mind; wandering through exhibitions together with and next to others, I’m getting the slight idea of being part of something whole. Maybe it’s no coincidence that many of my most intense moments in this documenta are built on sonic and musical grounds. Maybe it’s my other big passion – being a dancer in a club, being in the collective setting of musical experience, that’s coming into play.

› Prinz Gholam rest in calm, solemn, continuous positions of togetherness versus soleness (postures extracted from paintings of Delacroix on historical war scenes, deepened through exercises on interconnectedness), pointing to nuances of communality in all its facets. I’m surprised nobody’s joining them, when we—all spectators—just at that moment, watching them and watching others, are becoming part of a collective.

› In the auditory of Athens Conservatory, a dark, huge, oval space with rows of seats in stone, I’m taken into sounds composed by Emeka Ogboh, where financial crises from 1929 until today, as well as personal and historical memories are molded into sonic landscapes that create an unruling state of being within myself. Can this abstract way of talking about politics take me deeper into the topic than the latest news would do?

› Susan Hiller’s sounds are made of calmly spoken sentences – recordings of words, expressions, songs by endangered languages, or extinct now, once we listen to those recordings. What I hear is special: meandering between what are words, sounds, noises and sometimes something musical, I’m torn into an unknown world, lead to limits of experiences. Beautiful, sad, melancholic: language in its most abstract sense.

› My perception about new possibilities of exhibiting is raised in the art of Beau Dick, the “maker of monsters” who recently passed away. His carved masks, beings with enormous meanings outside the context of the art world, are taken out of the exhibition before it ends and are danced for a final time and then ceremonially burned (there is rebirth within this destruction, as now there is a responsibility to carve a new set of masks, which in turn keeps them alive)Beau Dick | documenta 14: Daybook | 15. August—which is in itself a frontal attack on the system of art, its mechanisms of capitalizing and colonializing.

› Pauline Oliveros:
You are free and
traveling through
Sounds of Great Liberation. No matter the venue,
the composition
is the listening,
Sounding,
Dreaming.
Being
and
Non-Being.
Choosing
in each
moment
until the listening of all
is heard,
and everything you do
is in all ways
New.Pauline Oliveros | documenta 14: Daybook | 23. July

In At hens I feel t hat , through questioning my western subjectivity, I become vulnerable and as such more open to being touched than ever before. The texts are moving me deeply, images and sounds are finding an echo, and there is an excitement and hope arising that I don’t get rid of since I’m back from Athens: that art will (in a very composed and straightforward way) lead to shared experiences, and eventually be able to relate to everyday life.

beyond chance and control 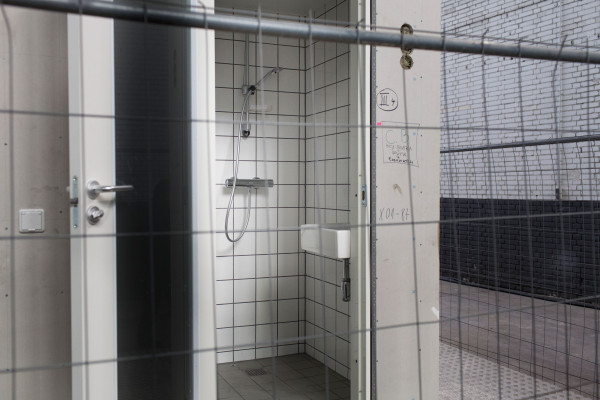