Art After The End Of Art

“Clov: Do you believe in the life to come.
Hamm: Mine was always that.”
—SAMUEL BECKETT

In Plato’s Republic, we witness one of the strongest attacks on art ever written. In his Book X, Socrates argues that while a craftsman is a useful member of society building useful artefacts, an artist is just an imitator creating appearances of real objects. As a consequence, Plato described a society in which mimetic art is considered inferior to handcrafts, something rather useless. According to Plato, the ideal society is led by a philosopher and not by an artist. He thought of a system based on philosophical, not poetic, education. Artists, especially poets, are considered dangerous to Plato, because they have the potential to impress young people by repeating rather than by describing sonnets and plays, tempting them to imitate rather than to comprehend epic poems. At a certain point, Socrates even suggested the need to avid poetry books altogether, and one definitely could imagine Plato replacing Homer as a model of education for future generations. Seeing art as something useless for society has been a reiterative perspective in the course of history. Even in times when it was used as a political anti-establishment or activist tool, “it is seen as ultimately celebrating and aestheticizing the status quo – and thus undermining our will to change it. So the way out of this situation is seen mostly in the abandoning of art altogether”.Boris Groys | On Art Activism | e-flux Journal #56 | June 2014

A second powerful attack on art came from Hegel as he declared art as a thing of the past. “Art, considered in its highest vocation, is and remains for us a thing of the past. Thereby it has lost for us genuine truth and life, and has rather been transferred into our ideas instead of maintaining its earlier necessity in reality and occupying its higher place.“Hegel | Lectures on Aesthetic | The italic is made by the author of this article | 1835-1838 Even though art (especially in the form of poetry) is part of the trinity of the objective spirit and “was believed to meet the highest spiritual needs of men and women”, it achieved its role in history and from there it has to become part of the realm of philosophy and only philosophy can meet the needs art once met, only then can art be considered as part of the Absolute Spirit. Despite the fact that art is over and over a product of thought: Aus dem Geiste geborene und wiedergeborene, it cannot be compared to philosophy as art “must express its thought by sensuous means”.Arthur C. Danto | Hegel’s End-Of Art Thesis | 1999

In Hegel’s view, art will continue existing after its end, but not necessarily as we have witnessed it in the course of the last two hundred years after his Vorlesungen über die Ästhetik. He envisioned an art that “[…] can be used as a fleeting play, affording recreation and entertainment, decorating our surroundings, giving pleasantness to the externals of our life, and making other objects stand out by artistic adornment.“Hegel | Lectures on Aesthetic | 1835-1838
He perceived art as playing the mere function of giving joy by consuming and worshipping it in all its forms. One can recognize he does not consider pertinent Hume’s position regarding taste in art or Kant’s perspectives concerning the aesthetic experience. For him “taste is directed only to the external surface on which feelings play [...]. A so-called ‘good taste’ takes fright a tall the deeper effects of art and is silent when externalities and incidentals vanish.” Hegel doubted the possibility of an individual experience of art based on its aesthetics and did not believe that the aesthetic experience could be a vehicle for comprehending life. Furthermore, the possibility of an autonomous art was not even considered in his system of thought, which, in my opinion, is necessary for making the thesis of the End-of-Art plausible. Art had to transcend into philosophy in order to avoid failing as religion did.

His premonition about the future of art was accurate, however, Hegel’s statement was premature, the end-of-art thesis required a process of Entkunstung, of ‘de-aestheticization’, an on-going historical continuum that he couldn’t witness but theoretically envisioned perfectly. Hegel’s thesis occurred while art was facing one of its biggest revolutions towards the conquest of its autonomy, which resulted in it finding its climax in Modern Art and the achievement of formalism. This is a turning point where art started to become entkunstete and its nature slowly into philosophy. The sensuous forms will never disappear (I do hope so), but these forms, following Hegel’s thoughts, do not satisfy anymore the needs of society as a way of thinking and comprehending life. That is why categories like taste, quality and beauty were object of constant attacks by Avant-garde movements, as it turned out they needed to be surpassed and suppressed.

The decade of the 1950s is the historical moment when Hegel’s thesis of the end-of-art, where art is considered a thing of the past and should be understood as philosophy, attains strong sediments.
After Hegel, as we know, art keeps developing through new artistic expressions, movements, discourses and even revolutions. Since the appearance of the Avant-garde and especially the Neo-avant-garde movements, as a consequence and response to the process of reductionism embodied in the theory of purity of medium defended by Clement Greenberg’s narrative of Modern Art, the philosophical nature of art emerged in detriment of its aesthetics. Here is where the figure of Duchamp appears to reveal how aesthetic gratification is no longer important, or at least no longer a required experience in art. He wanted “to inspire a kind of intellectual gratification [...] and part of his agenda was to render taste irrelevant, another was to render skill irrelevant. He wanted to get rid of the ‘eye’ of the artist and the ‘hand’ of the artist, etc”.Arthur C. Danto | The Distance Between Art and Life | 2005

By dissolving the difference between ordinary objects and artworks, Duchamp return(s)-us to Plato, to the conquest of visual appearances, to mimetic art. In this sense, what modern art did was to dissolve reality, to put it in museums and as Boris Groys says: making clear the dead of a regime by showing its corpse.
By bringing fragments of reality to art, as we could see in Dadaism and some decades later in movements like Minimal, Fluxus and Pop Art, the nature of art was to be reconsidered. “In the twentieth century, all criteria of quality and taste were abolished by different artistic avant-garde. So, today, it makes no sense to appeal to them again.”Boris Groys | On Art Activism | e-flux Journal #56 | June 2014 The consequence of this dissolution of boundaries between art and life is that in the end, anything could be a work of art, making more remarkable the importance of considering the philosophical nature of art as its primary value in detriment of the aesthetical one.

Adorno (well known for being Hegelian) pointed out this process, but he was more concerned about the aesthetic nature of art and its autonomy than on its philosophical nature. By creating the term Entkunstung he wanted to state how art loses its qualities and traditional characteristics to become something else. I would like to interpret ‘traditional’ as of its time, so this process of loss, of de-aestheticization, can happen (and it did happen) in every moment in history, somehow as an inevitable historical dialectic process. As we can see today, art and aesthetics are kind of a problematic equation, maybe a forgotten or even disrupted relation that has to be reconsidered again and again; however, that is not the main topic of this essay.
Adorno was concerned about the role played by the Kulturindustrie in the production and reception of art and how this presence was influencing and devaluing the aesthetical and discursive potential of autonomous art, transforming art into merchandise, another product of the industry and Capitalist system.

Entkunstung tries to show how the distinction between autonomous art and other spheres of life, becomes unclear as art is absorbed and assimilated by the culture industry. In this order of ideas, art leaves the fantasy of its independence and freedom, becoming powerless art and, under this panorama, society gives away the capability of understanding and criticizing life through aesthetics, as Schönberg, Kafka or Beckett have done it. Art has moved towards its de-aestheticization, to its entkunstung, dissolving itself into life and developing into an object of mere intellectual consideration, attempting to achieve its nature philosophically instead of aesthetically. It feels as if art is walking backwards to the future; still looking back and trying to understand which role should play in our contemporary society, and who knows, maybe a turn-around, a coming back to aesthetics can be the right direction after its end. 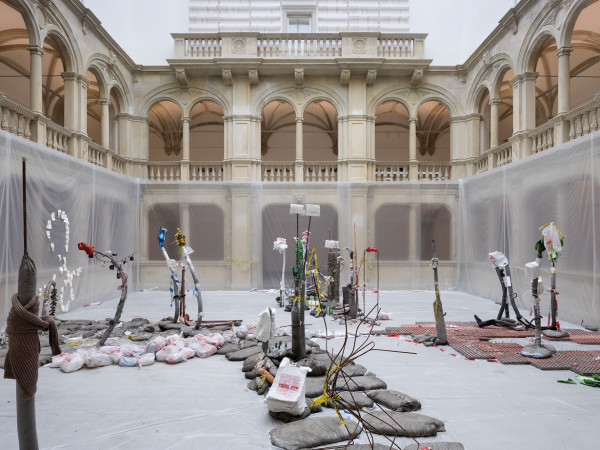 Material Matters: On Transparency in Art and Politics

If life were completely rational

We hope you can see this book as we do: as an extension of memory; interpretations of our time that aspire to reinvent the world anew, “as a whole to be imagined”.